Your Brand & The Presidential Election 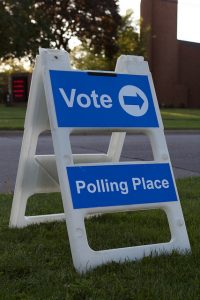 Whether you love or hate presidential politics, it’s hard to ignore all the political hoopla in an election year. For sure, the race for the White House can give us hope and make us angry. It can also be an irresistible source of inspiration for marketers. A spectacular red, white, and blue balloon drop is sure to attract some attention. We get it. But should you really use an election-themed marketing campaign to sell an air freshener or a bag of potato chips?

As an advertising and PR professional, it can feel like a win-win to capitalize on a shared national experience—some might call it blood sport—like a presidential election. Comedians certainly know that national candidates are a rich source of material. You betcha, Tina Fey’s parody of Sarah Palin is unforgettable.

But like political jokes, advertising campaigns that tap into election-year drama can fall flat, or even alienate a brand’s target audience. Done right, a political theme can inject timely energy into a marketing campaign that has nothing to do with politics. Here are few tips to help you decide whether your non-political brand is right for an election-year tie-in.