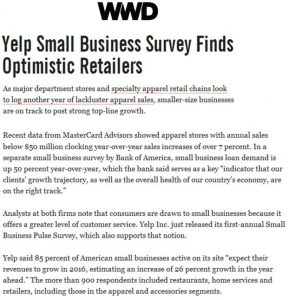 Recent data from MasterCard Advisors showed apparel stores with annual sales below $50 million clocking year-over-year sales increases of over 7 percent. In a separate small business survey by Bank of America, small business loan demand is up 50 percent year-over-year, which the bank said serves as a key “indicator that our clients’ growth trajectory, as well as the overall health of our country’s economy, are on the right track.”

Analysts at both firms note that consumers are drawn to small businesses because it offers a greater level of customer service. Yelp Inc. just released its first-annual Small Business Pulse Survey, which also supports that notion.

Yelp said 85 percent of American small businesses active on its site “expect their revenues to grow in 2016, estimating an increase of 26 percent growth in the year ahead.” The more than 900 respondents included restaurants, home services and retailers, including those in the apparel and accessories segments.

The survey also revealed the growing importance of digital technology. “The majority of small business owners agree that digital tools allow their companies to remain nimble and personal even as they scale rapidly,” the researchers of the survey said in their report. “An impressive 79 percent of businesses surveyed believe that digital tools allow them to provide a more personal touch in their communities, enabling them to address the individual needs of their customers.”

The researchers also said in today’s “feedback economy,” where Yelp positions its business, “customer-business interactions are easier than ever” and it is “becoming an even bigger resource in helping small businesses build relationships and improve customer service.”

Harvard University professor of business administration and Yelp’s economist in residence Michael Luca said “small businesses are an important part of the economy. They provide roughly half of all private-sector jobs, and also provide direct benefits to the communities that get to enjoy their goods and services.”

Regarding the survey, Luca said it was “interesting to peek into the minds of small business owners, to see how they’re feeling and what they’re thinking about. This group of businesses is clearly optimistic, which is consistent with relatively strong consumer sentiment and a recent uptick in retail sales.”

Still, the respondents expressed concerns. The survey found that attracting and retaining customers were a top issue for 60 percent, while 32 percent said managing a limited marketing budget was a primary concern. And competition from larger competitors was a top issue among 30 percent of those polled.

“Neither health care nor minimum wage concerns troubled small businesses as much as growing their customer bases and rising above competition,” the company noted. “Only 18 percent of businesses identified time spent on non-core business elements as the main disadvantage of running a small business.”

“Small businesses worry about their own ability to grow, even as they remain optimistic,” Luca said. “Health care and other concerns, while important, seem to be less of a problem for many small businesses as they prioritize growth.”