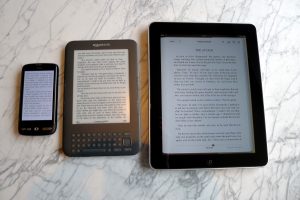 Apple unveiled its new iPad today and, in a matter of seconds, revolutionized an area of the digital lifestyle that is still only emerging.

Ironically, it seems like Steve Jobs may have read an old page from the Bill Gates / Microsoft playbook.  A page that reads:

Sometimes it’s better to be second in line.  Let others take a first shot at carving out a new category of device.  Watch how they do it.  They’ll probably hit close to the target – but not quite hit the bulls-eye.  After they’re done, aim for the bulls-eye and actually hit it.  Now, you’ve got a winner.

This is not to suggest that Apple isn’t an innovator or a brand that paves new ground.  Clearly, they are.  This particular device from Apple, however, is less about offering something totally new and more about succeeding where netbooks and e-readers fall short.

The iPad isn’t a laptop.  It’s not a netbook – which Jobs correctly portrays as being sub-par laptops that don’t do anything all that well.

Wakefield’s own market research confirms that Apple is likely heading in the right direction.  In a recent nationwide Wakefield poll, approximately two-thirds (67%) of Americans felt that portability was defined better by what a device could actually do, not by how compact it was.