Which Cigarette Do Doctors Prefer? 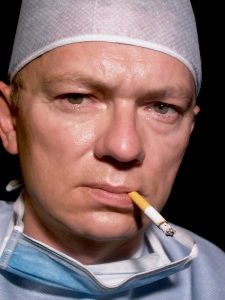 The story behind this ad campaign is fascinating.

In the 1920s and ’30s, cigarette manufacturers were among the first to use “research” based brand claims in mass communications. But the company that did it best was the maker of Camels – that’s right, tasty, delicious (and healthy?) Camels.

1946-1951 – R.J. Reynolds Tobacco Company featured research in their commercials in order to ease consumer fears about smoking. They surveyed doctors as they entered a physician’s convention asking, in part, “What cigarettes are you carrying?” Many doctors reported carrying Camels. Why? Because RJR also planted cartons of Camels in their hotel rooms.

Thankfully, a PR agency (way to go Hill & Knowlton!) actually killed the practice in 1953 by organizing industry leading brands in a mass rejection of the advertising tactic.