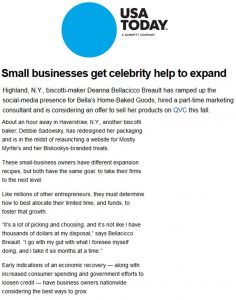 Brother received a great deal of media coverage with the second annual “Brother Small Business Survey” conducted by Wakefield Research. The initial coverage of the survey, which was released in March, consisted of stand-alone articles about the findings of the survey.

The coverage did not stop there. One month later, Wakefield’s survey for Brother received more attention – this time in USA Today – when some of the survey results were included in a broader feature on small businesses.

Findings from the “Brother Small Business Survey” relate to the small business expansion challenge by showing how “growing is key.” The survey showed that almost half of small-business owners plan to invest in their business in 2011 in order to gain an advantage over the competition. This number is up 11% from last year, when most companies chose to stockpile cash to prepare for an economic downturn.

Contact us for more information on how you can work with Wakefield.