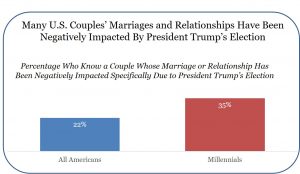 Wakefield Research often explores the trends driving dialogue in the U.S. and around the world. As part of this, our research teams regularly field surveys to examine how current events impact our lives. The increasingly divided political discourse in the U.S. was the impetus behind a new survey we conducted to determine how, if at all, this environment – and political differences in general – have impacted Americans’ romantic relationships.

When we explored the effect of the current political landscape, we found that more than 1 in 5 Americans (22%), including 35% of Millennials, know a couple whose marriage or relationship has been negatively impacted specifically due to President Trump’s election.

Members of the media can request the full results and submit questions to media@wakefieldresearch.com.

The Trump Effect on American Relationships Survey was conducted by Wakefield Research (www.wakefieldresearch.com) among 1,000 nationally representative U.S. adults ages 18+, between April 12th and 18th, 2017, using an email invitation and an online survey. Quotas have been set to ensure reliable and accurate representation of the U.S. adult population 18 and older. The margin of error for the study was +/- 3.1 percentage points.