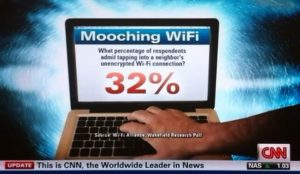 Just like those random networks that pop up on your computer, media hits can pop up at any given time.

Featured as a front page article in the Money section of today’s USA Today (and with a page 1A jump), our survey findings for The Wi-Fi Alliance released earlier this week have spread like a Wi-Fi wildfire. By focusing on aspects of Wi-Fi tech that many could relate to, such as using a neighbor’s unencrypted connection (guilty as charged!), Wakefield was able to deliver data with huge media potential.

Other than USA Today, prominent online news outlets such as Information Week, IT World, and afterdawn.com have picked up on the findings, along with a television segment earlier today on CNN.  This is after less than 24 hours of outreach.

Whether you’re reading this post while connected to Wi-Fi or not, it goes to show the value in using a targeted PR omnibus to garner exciting media coverage.