Wakefield Closes Out 2013 with Snapshots 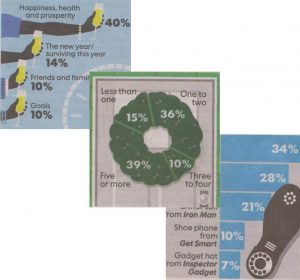 Three Wakefield Research surveys graced the pages of USA Today during the past week! A survey for Kmart snagged the Christmas Snapshot on December 25th. The holiday survey revealed how long Americans keep their holiday decorations up after December 25th:

Two Wakefield surveys were featured in today’s newspaper. The first, focusing on fans’ favorite fictional wearable tech items for Citrix, and the other, a Barefoot Bubbly survey dedicated to New Year’s Eve. The survey found what Americans would be toasting to tonight on New Year’s Eve: