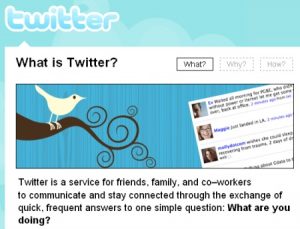 There is both good news and bad news for Twitter. First, for the good news: retention rates are as high as they’ve ever been — meaning the trend looks good for Twitter. Plus, thousands of new Twitter accounts are being opened each day.

Now, here’s the bad news: 60% of people who register on Twitter stop using the service after a month.

As my high school social studies teacher used to say, “Don’t forget about the context.” Well, in this case, the context is social networking. And compared to Facebook and MySpace, Twitter’s retention rates aren’t very good. Mashable posted this chart, which offers a good visual comparison of retention rates for the three social-networking sites.

Yet retention rates may not be the biggest challenge that Twitter faces. This new report by HubSpot reveals that 55% of Twitter users have never tweeted and 53% have no followers.

In other words, it’s kind of like one of those blogs you stumble on whose last post was eight months ago. Is it still a blog? It technically may be part of the blogosphere, but it seems like a stretch to say it’s truly a functioning blog. Apparently, the same might be said for a large chunk of Twitter users.