The Week in Snapshots 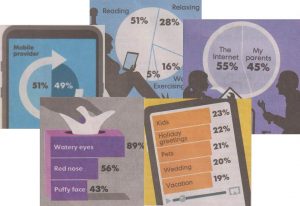 The Wakefield Editorial Panel is on a roll with USA Today Snapshot editors! Just in the last week, Wakefield surveys have been featured in 5 Snapshots! The creative and newsworthy surveys covered a range of topics, such as smartphone usage, sleep habits and allergies. The findings include: