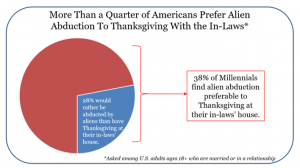 According to a recent omnibus survey by Wakefield Research, more than a quarter (28 %) of married Americans would rather be abducted by aliens than have Thanksgiving dinner with their in-laws. And it’s Millennials and parents who are most eager to gamble on extraterrestrial contact, with 38% of each finding an alien abduction preferable to Thanksgiving with their in-laws.

For those of us who do make it to the dinner table without a detour via UFO, we may still be looking for an escape. The survey found that nearly a third (32%) of married Americans will check their smartphones 5 times or more over the course of Thanksgiving dinner. Another 28% expect to check their phones slightly less frequently (1 to 4 times).

It’s those who have grown up in the digital age that are most likely to stay connected, but checked out, during the meal.  According to the survey, more than half (53%) of Millennials expect to check their device at least 5 times. Only 13% of Baby Boomers will do the same.

Parents are also more focused on their devices than dinner: 45% will check their phones at least 5 times. Maybe it’s the busy lives of Millennials and parents that necessitate the frequent phone checks, but this year, you might consider letting the feasting finish before posting your Turkey Day #TBT.