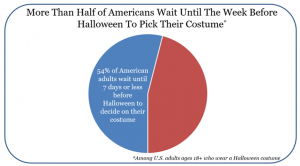 Candy corn comas, carving jack-o’-lanterns and picking the perfect Halloween costume aren’t just for kids – adults love getting in the spooky spirit, too. According to a recent omnibus survey of 1,000 Americans 18+ conducted by Wakefield Research, those who are spending on Halloween will shell out an average of $73 on Halloween this year. More 1 in 4 (28%) will spend $100 or more.

While most adults stopped trick-or-treating at age 14, on average, they still enjoy dressing up for the spookiest day of the year. But the added responsibilities of adulthood can leave many scrambling to find a costume. On average, adults who wear a costume decide on their outfit just over two weeks out from Halloween (16 days), but most (54%) wait until the final week.

Halloween isn’t all fun and games – it can also be one of the most frightening nights of the year. Americans’ top “Halloween fears” are clowns (21%), like Pennywise from It, dolls (20%), like Chuckie from the Child’s Play films, and zombies (19%), like those on The Walking Dead. Given the popularity of the recently released It movie, many Americans may get their screams from the movie theater rather than door-to-door this year.