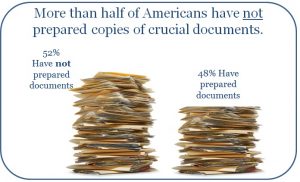 Don’t Wait For the Next Storm to Get Ready.

Hurricane Sandy hit the East Coast with a deadly fury. The destructive storm left millions in the dark, flooded entire communities, paralyzed the New York City subway system, and claimed more than 70 lives in eight states.  After a staggering natural disaster like Sandy, emergency responders and cleanup crews work hard to save lives and restore order. In fact, a majority of Americans have faith that local authorities will come to their rescue in an emergency.

But individuals can make an enormous difference during and before a disaster. Sadly, many of us aren’t as prepared as we should be.

According to a recent national survey by Wakefield Research for Adelphi University for Health Innovation, many U.S. adults do not have resources or plans in place to cope with a disaster. Consider the survey data below a call to action.

Basic disaster preparations pay off. To weather the next storm, get ready now.