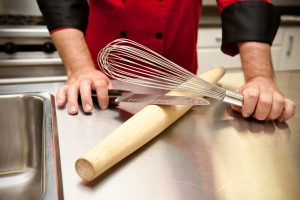 This is from last week’s NY Times Weekend Magazine cover story on cooking. The article is great and the theme is that we’re more interested in watching cooking than actually doing it ourselves and the impact this is having on our society as a whole. Interesting and agree with it 100%:

“Cutler and his colleagues also surveyed cooking patterns across several cultures and found that obesity rates are inversely correlated with the amount of time spent on food preparation. The more time a nation devotes to food preparation at home, the lower its rate of obesity. In fact, the amount of time spent cooking predicts obesity rates more reliably than female participation in the labor force or income. Other research supports the idea that cooking is a better predictor of a healthful diet than social class: a 1992 study in The Journal of the American Dietetic Association found that poor women who routinely cooked were more likely to eat a more healthful diet than well-to-do women who did not.”

Unfortunately, no word on whether drinking a beer while watching someone else cook has the same effect. Let’s hope so.