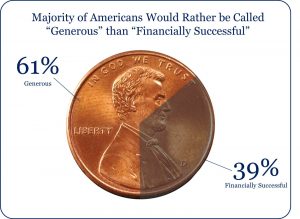 Mark Zuckerberg’s recent pledge to donate nearly all of his Facebook shares to charity over the course of his lifetime – an estimated $45 billion – highlights the growing foothold philanthropy is gaining in the Silicon Valley: and Americans are taking note.

Indeed, in a recent PR survey for Thrivent Financial, Wakefield Research found that 61% of Americans would rather be called “generous” than “financially successful.” And, more than 1 in 3 Americans (35 percent) think the purpose of the money they make is to give back – whether during their lifetime or after.

Part of this may be due to initiatives that get the charity conversation going, like #GivingTuesday, a response to Black Friday and Cyber Monday which encourages Americans to kick off their holiday and end-of-season giving. Either way, it’s a topic that’s gaining widespread media attention that will only heighten throughout the rest of the holiday season and into the New Year – so listen up as a new generation of Americans changes the model for giving.