Not So Fast, Wearable Tech! 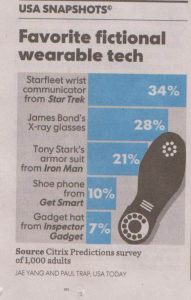 Google Glass made headlines in 2013, but is the wearable technology a passing trend or here to stay? A Wakefield Research and Citrix study revealed that while 3 in 5 (60 percent) Americans think wearable tech will be as common as smartphones in the coming years, nearly the same amount – 61 percent – have no plans to purchase a wearable device themselves.

We also had a little bit of fun with the survey, ranking Americans’ favorite fictional wearable tech items:

The Citrix wearable tech survey has been featured in top media outlets, including the Financial Times, Slate, Reuters and USA Today.