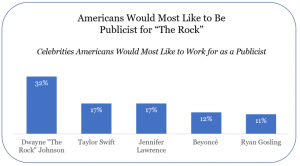 As a market research company whose PR Polling team works closely with the PR industry, we know that the life of a publicist may sound flashy and star-studded, but that most publicists will give you a different story – of stressful, on-the-go lives, always needing to be at the ready to take care of their clients’ needs. In honor of National Publicist’s Day, Wakefield Research was curious as to which celebrities Americans are most willing to put in the long hours to support.

According to the survey of 1,000 American adults ages 18+, Dwayne “The Rock” Johnson (32%) topped the list as the celebrity Americans would most like to work for as publicist. Taylor Swift and Jennifer Lawrence tied for the second most popular choice, at 17% each. Coming in last? Heartthrob Ryan Gosling, with only 11% of respondents wanting to be his flack.

The survey found that Gen Xers (40%) are especially enamored by the former wrestler turned movie star, especially when compared to Millennials (22%). And though Millennials also gave Dwayne the top spot, Channing Tatum (19%) and Jennifer Lawrence (18%) were close behind for Gen Y. Tatum, star of the infamous “Magic Mike” movies, is notably more popular among women, with 17% of them willing to manage his media visibility and publicity, while only 7% of men feel the same.