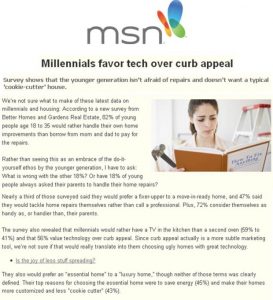 We’re not sure what to make of these latest data on millennials and housing: According to a new survey from Better Homes and Gardens Real Estate, 82% of young people age 18 to 35 would rather handle their own home improvements than borrow from mom and dad to pay for the repairs.

Rather than seeing this as an embrace of the do-it-yourself ethos by the younger generation, I have to ask: What is wrong with the other 18%? Or have 18% of young people always asked their parents to handle their home repairs?

Nearly a third of those surveyed said they would prefer a fixer-upper to a move-in-ready home, and 47% said they would tackle home repairs themselves rather than call a professional. Plus, 72% consider themselves as handy as, or handier than, their parents.

The survey also revealed that millennials would rather have a TV in the kitchen than a second oven (59% to 41%) and that 56% value technology over curb appeal. Since curb appeal actually is a more subtle marketing tool, we’re not sure if that would really translate into them choosing ugly homes with great technology.

They also would prefer an “essential home” to a “luxury home,” though neither of those terms was clearly defined. Their top reasons for choosing the essential home were to save energy (45%) and make their homes more customized and less “cookie cutter” (43%).

“It’s critical that real-estate professionals understand what embodies a quintessential home for the millennial generation, which vastly differs from the traditional norms of generations before them,” Sherry Chris, president and CEO of Better Homes and Gardens Real Estate, said in a news release. “Understanding technologies to communicate with this generation is now only one piece of the puzzle for agents; ‘smart’ technological capabilities must now be ingrained into the home itself.”

The survey did not go into what technology would be considered essential, though respondents mentioned as most important an energy-efficient washer and dryer (57%), a security system (48%) and a smart thermostat (44%). With the growth of wireless devices, the technology most people need is lots of electrical outlets, though surround sound is still popular, as are energy-efficiency upgrades.

Other findings of the survey:

Megan Hopkins, a millennial writing at HousingWire, agreed with the findings of the survey. She noted that she and her husband were looking for a home in an older, more established subdivision closer to the city center, rather than a newer subdivision farther out where they could get more home for their money. She writes:

Like those 77% of millennials, I would prefer a customized home in a better location compared to a more typical home, which may be more luxurious but is less convenient in terms of location. For my generation, nothing takes the place of being in a good location around shops and restaurants and all of the local amenities with which we’ve become accustomed.

How do you think the millennial generation will change housing?