Kids Dream Big in The Game of Life 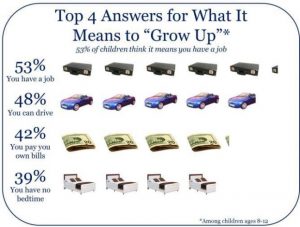 Have you ever played Life – Hasbro’s infamous board game – and drawn the “Lawyer” Career Card – again? Did it leave you dreaming of something edgier – like a life behind the wheel, or even under cover? Well, you (and your kids) are in luck. The Hasbro toy company has updated Life to include new career options based on a survey of children ages 8 to 12 across seven countries.

Half of kids think having to grow up means having a job (53 percent). So what do they want to do when they grow up? The kids’ top pick for a career update was a video game designer. They also voted for a fashion designer, secret agent, race car driver, professional athlete and chef.  And these kids are banking on a hefty salary: those in the U.S. estimated that their annual salary would be $249,319, when they grow up. Hope they’re sharing with their parents!

The online survey, conducted in partnership with Wakefield Research, gathered responses from 400 children in each of seven countries (the U.S., U.K., Germany, France, Mexico, South Korea and Australia).