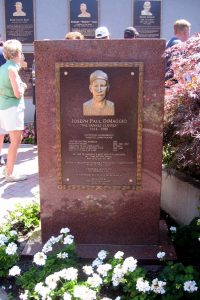 Sixty-eight years ago this summer, baseball player Joe DiMaggio was well on his way to achieving one of the most celebrated streaks in sports history. Joltin’ Joe would eventually get at least one hit in 56 consecutive baseball games.

It seems pretty incredible. And it was. Yet maybe DiMaggio’s streak shouldn’t have surprised fans quite as much as it did.

Writing in this weekend’s edition of the Wall Street Journal, Leonard Mlodinow explains:

. . . Recent academic studies have questioned whether DiMaggio’s streak is unambiguous evidence of a spurt of ability that exceeded his everyday talent, rather than an anomaly to be expected from some highly talented player, in some year, by chance, something like the occasional 150-yard drive in golf that culminates in a hole in one.

. . . That randomness naturally leads to streaks contradicts people’s intuition. If we were to picture randomness, we might think of a graph that looks jerky, not smooth like a straight line. But random processes do display periods of order.

In a toss of 100 coins, for example, the chances are more than 75% that you will see a streak of six or more heads or tails, and almost 10% that you’ll produce a streak of 10 or more. As a result a streak can look quite impressive even if it is due to nothing more than chance.

It’s an interesting article, and I hope Yankee fans or other readers don’t misinterpret Mlodinow’s views. In fact, he agrees that DiMaggio’s “great ability” played a role in the 56-game streak “for if we are to compare DiMaggio’s performance to a coin, it must be a weighted coin.”