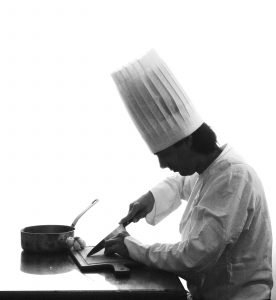 Survey: Which Celeb Chef Would You Let into Your Kitchen?

Have you decided on your Thanksgiving menu? Whether you plan to stick to the traditional roasted turkey or to surprise your guests with an adventurous side dish of curried carrot soufflé, it’s fun to fantasize about letting someone else do every bit of the cooking this year – someone really famous.

Wakefield Research and HomeGoods asked Americans which celebrity chef they would most like to cook their holiday meals. And it’s no surprise; Americans value homey and traditional holiday chefs.

Food Network Chef Paula Deen (37%) was the number one choice to be Americans’ holiday chef – bring on the butter y’all. 20% of Americans picked Gordon Ramsay from Hell’s Kitchen, followed by Martha Stewart (14%), Giada De Laurentiis (10%), and Tom Colicchio from Top Chef (10%). And after the New York Times’ blistering review of Guy Fieri’s new Times Square restaurant, we’re guessing that the chef’s probably not high on many people’s lists either.

We suspect, like most Americans, you won’t have a celebrity chef or a restaurant critic in your kitchen this Thanksgiving – you’ll be celebrating with family and friends – and that’s truly something to be thankful for.