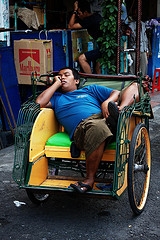 A lot of us. According to the N.Y. Times, a new survey reveals that one in three adults admit that they take a nap on the average day.

Not surprisingly, napping was more common for those who had experienced trouble sleeping the night before. And nappers tend to be poorer, older and less happy than the rest of us. (If I could take a nap once a day, I’d probably feel a heck of a lot happier.)

But let’s not forget that some pretty famous people have been confirmed nappers — Albert Einstein and Winston Churchill, to name a few.