Fist Bump to Your Health 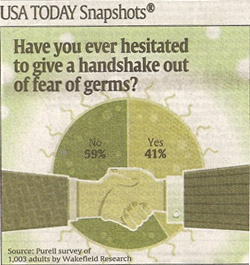 You’ve got to hand it to Wakefield Research – on second thought, make that a fist bump instead. A recent study published in the August issue of the American Journal of Infection Control has generated plenty of media attention. It found that a fist bump is a less germy option than a traditional handshake.  The conclusion doesn’t surprise us! Back in 2010, Americans revealed their aversion to the handshake in a custom PR survey by Wakefield for Purell. Coverage included a USA Today Snapshot.

The handshake isn’t likely to go out of style completely. However, Americans have known for a while that the traditional greeting may need a healthy update.