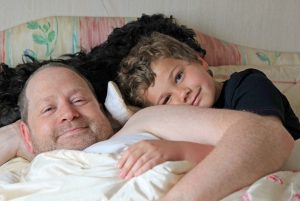 Remember last year when dad’s face lit up as you bestowed upon him the most prodigious wrench set ever assembled? How well do you know his poker face? At the risk of being the bearer of bad news, nearly half (46%) of dads admit pretending to like a gift at some point.

A recent Wakefield research study covered by the AP and commissioned by Western Union and MSLGROUP confirms that pleasing the old man this Father’s Day may not be as easy as you had previously thought.

Still skeptical? Buy him the boxed set of Sex and the City and don’t be surprised when he whips up a Cosmo just for appearances. Fathers are naturals at masking disappointment for the sake of their children’s self-esteem. It’s part of the job description.

Don’t panic if you are reeling in the wake of this revelation. 34% of dads have a gift in mind that is one-size fits all, won’t hook its way into a water hazard, and doesn’t leave an overwhelmingly musky trail in its wake. Nope, not a Snuggie. We’re talking greenbacks.

Sure, you might say, money is safe but too impersonal for a gift to dad. I’m sure he didn’t think it was impersonal when he was cutting off checks for your tuition payments.