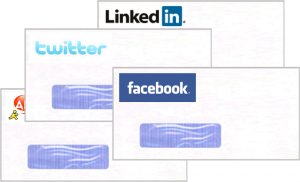 United States Postal Service spokesman Ryan Claven announced today that the snail mail giant will be unveiling a new procedure that allows customers to keep friends and loved ones abreast of the happenings in their lives the old-fashioned way: with a stamped envelope.

This move comes on the heels of a week in which the USPS has received harsh criticism after its decision to cut Saturday mail service.

“The United States Postal Service has long been this country’s #1 source for communication and we have no intentions of relinquishing that title.  The USPS will one day be synonymous with social media and that quest starts today,” said Claven at a press conference this morning.

While details of the plan are still sketchy at best, it appears that users will be able to drop tweets, texts, IMs, videos and even status updates into the normal blue mail boxes and, provided you have the appropriate postage, the USPS will deliver them in a timely fashion.  Users will also have the option of going into local branches and paying additional fees for such features as “priority texting” or “first class status updates.”  Consumers can even pay to receive confirmation that their IM was acknowledged.

A recent survey conducted by the Center for Social Media Self Assessment shows that 87% of social media users do not care how quickly their information is received but only that it is received at all.

“It will be tough for other companies to compete with our moderately short lines and adequately trained staff,” said Claven, whose sentiments have been echoed across the nation.  “I’d like to see Facebook guarantee that you’ll be able to post a video to YouTube despite rain, hail, sleet or snow.  Every time it rains, my internet goes out,” said Wayne Newman, President of the DC chapter of the American Mail Carriers Association of America (AMCAA).  “Also, why should we be the only federal employees to work on Saturdays?  I like college football just as much as the next guy!”