A Country Divided: 10 Per Cent of American Couples Have Ended a Relationship Because of Political Differences… and a THIRD Say They Would Consider Getting a Divorce if Their Spouse Backed Trump

Donald Trump is causing couples to split across the country, as fights break out over the president and politics in general.

One in 10 couples have ended their relationship over political differences, according to a new study published Wednesday.

Wakefield Research‘s study, The Trump Effect on American Relationships Survey, investigated the relationships of 1,000 people earlier this year to determine the emotional impact the president was having.

The study found 11 per cent said differing politics have doomed a relationship, with the number even higher among millennials. The figure doubled for younger people, with 22 per cent citing politics as a reason for a romance breaking down.

A further 29 per cent said ‘the current political environment’ more broadly has had a negative impact on their relationship.

Almost a quarter of those surveyed – 24 per cent – responded by saying Trump’s election win has led to more disagreements and arguments with their partner about politics than ever before.

A third of all married people who took part in the survey said they would consider getting a divorce if their spouse supported Trump.

Wakefield’s research went on to find 22 per cent of people surveyed said they knew of a marriage or relationship specifically damaged by Trump’s election win. The figure again spiked among millennials, where more than one in three – 35 per cent – knew of at least one couple negatively impacted by the president. 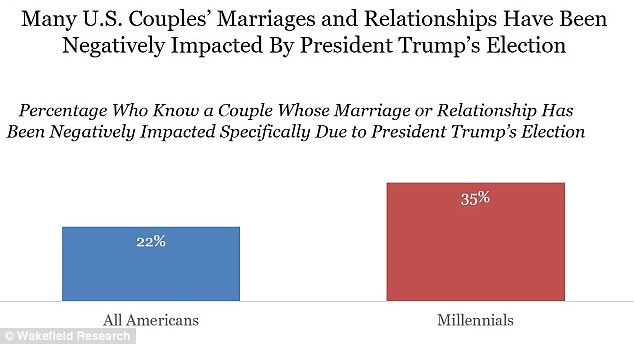 The graphic from the recent study shows how more than one in five said they know of at least one relationship negatively impacted by Trump’s election win.

One in 10 couples have ended their relationship over political differences, according to the new study. Pictured is a Trump supporter in California on May 1.

A third of all married people who took part in the survey said they would consider getting a divorce if their spouse supported Trump. Pictured are supporters of Hillary Clinton at an election night party

‘Since Donald Trump’s election, political discourse in the US has been more tense and divisive than ever,’ the group said in a statement, according to the Washington Examiner.

‘Passionately opposing points of views are not only driving wedges between strangers and even friends, but we are now seeing evidence that this dissent is having a detrimental impact on Americans’ marriages and relationships.’

The study was conducted nationally in April this year.