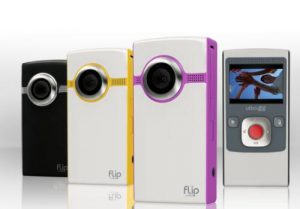 Cisco Systems has announced that they have discontinued all production of the popular Flip Video Camera.

The sudden scrapping of an entire production line may seem odd, but it does not come as a complete shock. Even though The New York Times called it one of the “great tech start-up success stories of the last decade”, Cisco has decided that it doesn’t fit with their core business model.

The Flip Video Camera, once the premier low-end video camera on the market, has had a remarkably short life-cycle that sees it headed to the recycling bin as fast as it flips. The advent of smartphones with video capabilities has users demanding “all-in-one” devices that made the Flip obsolete.

The Flip’s defining feature, the flip-out USB, had not seen any update since launch. Without the ability to take still photos or connect via WiFi, the Flip may have been doomed from the start.

You can still pick one up before the current stock runs out via Amazon or at the Flip Store.