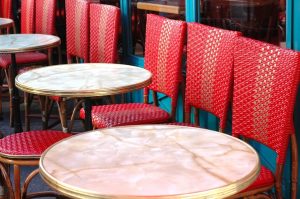 France used to be the land where lunch was the main meal of the day, a slow-paced affair at a cafe or restaurant that usually included three courses. But times have changed.

. . . French people increasingly are resorting to a humble sandwich for the noon meal. Some even gulp it down with a soft drink while sitting at their desks. So much so that the consumption of sandwiches in France has grown by more than a quarter over the past six years, to 1.8 billion annually, and climbed by 10 percent last year, according to market researchers.

Moreover, the change has often come at the expense of neighborhood cafes, where lunch still means a hot dish like grandma used to make and sitting around the table for an hour of conversation with friends or colleagues. The number of bars and cafes in France has fallen from 200,000 half a century ago to 38,600.

McDonald’s has enjoyed rising business in France for the past five years, taking full advantage of the evolution. Income at its more than 1,100 French outlets rose by 11 percent in 2008 despite the economic crisis, the company reported.