The Caramel Macchiato as an Economic Indicator 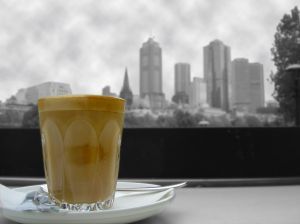 Consumers are still making changes in response to the economic climate.  That’s no surprise.  Lifestyle choices are being re-examined.  What can we live without?  What can’t we live without?  As consumers examine their spending habits, purchases are often divided into three categories.

Perhaps, another item on this list of luxuries is the cup of coffee.

Gourmet coffee from shops like Starbucks and Caribou Coffee illustrate how this has become a luxury item.  For the same $4.00 spent on one Grande Mocha Latte, a can of coffee from Folgers will yield at least two weeks worth of coffee.

In a recent survey conducted by Wakefield, more than two in five (43%) consumers had gone to Starbucks less over the past 12 months in an effort to save money.

On the other side of the barista counter, businesses like Starbucks shudder at the thought of losing that amount of revenue.  From 2008 to 2009, revenue dropped 5.8%, or $600M (From $10.4B to $9.8B).  It was the steepest decline in the Seattle-based company’s short, but decorated, history.

In February, Starbucks posted its first quarterly rise in sales in two years.  Is this a sign that gun-shy consumers are beginning to spend more on the daily luxuries they once struggled to let go?  On the heels of this announcement, projections have already been increased to over $12.6B.

Starbucks may be getting ahead of itself.  Looking forward to the next 12 months, nearly one in two (47%) consumers say they will be visiting Starbucks less in an effort to recover from the economic difficulties of the recession and to continue to save money for any future hardships.

As the economy continues to rebound, will all luxury items follow the path of the gourmet cup of coffee?  Will Americans run back to their guilty pleasures or keep moving forward without them?