As Seen in USA Today 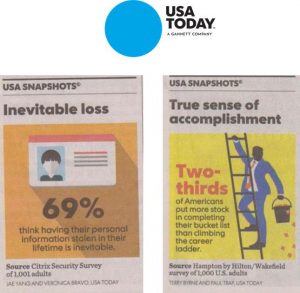 We know how to build a survey into a story. If you pick up a USA TODAY you’re going to see a lot of Wakefield Research: just this week, we supplied four Snapshot stats – two appearing in the September 29th edition of the paper and two more in today’s edition. Take a peek: