Amazon: Facing Challenges on All Fronts 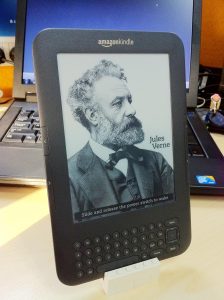 The news cycle is filled with evidence that the book-publishing and book-selling sector is rapidly changing in ways that could pose a stiff challenge to one of the major e-retailers. Wal-Mart’s price war over best-sellers isn’t the only development that Amazon.com has to worry about. According to Wired:

If you just ordered a Kindle, stop reading now or you’re in for a giant dose of buyer’s remorse. Barnes and Noble unveiled a new e-book reader called ‘Nook’, and it is hot, both inside and out.

Nook looks a lot like Amazon’s white plastic e-book reader, only instead of the chiclet-keyboard there is a color multitouch screen, to be used as a keyboard or to browse books, cover-flow style. The machine runs Google’s Android OS and it will have wireless capability from AT&T.

The $260 Nook-same price as the Kindle 2-is expected to be on sale at the end of November.

As if that weren’t enough, CNET reports on another potential threat that Amazon should have on its radar screen:

An initiative in the works from the nonprofit Internet Archive to centralize the electronic distribution of commercially viable books could upend the publishing industry and declaw Amazon.com, an industry analyst said.

On Monday, the Internet Archive, which among other things has been working for some time to digitize countless numbers of public domain texts, showed the first public look at its BookServer project, an initiative it dubs, “The future of books.”